Charming Python #b22: A New Peak


The Python Enterprise Application Kit (PEAK) is a Python framework for rapidly developing and reusing application components. While Python itself is already a very-high-level language, PEAK provides even higher abstractions. One fairly recent capability added to PEAK is the capability to create generic functions, and specifically to dispatch them on predicates, not simply on type. Sounds mysterious? Read on.

The easiest way to describe PEAK is as "whatever wild ideas Phillip J. Eby has studied most recently." Despite the tone, I am only half joking in that characterization. While PEAK attracts about as many contributors as other Free Software Python projects of moderate size, at heart the direction of PEAK is driven by the evolving goals and interests of its original creator.

The obvious consequence of PEAK following evolving interest is that it will probably be somewhat "experimental" for the forseeable future. That said, do not worry too much about the issue--every version of PEAK I have tried has been stable, and has provided concretely useful features. Moreover, you can now obtain an automatically updated tarball of the latest PEAK snapshot, complete with a friendly disutils installation script, with little fuss (see Resources)

In the year since I last looked at PEAK, the most interesting new idea introduced in PEAK is generic functions. This article will look at this capability, even though it forms just one corner of PEAK as a whole. Still, given the natural association of this idea with my own multiple dispatch module, multimethods, I am excited to look at PEAK's extensions to dispatch styles. But before proceeding to the discussion of generic functions, it is worth glancing at the diagram of the components of PEAK given on the PEAK Wiki front page (check that page for latest status, see Resources). 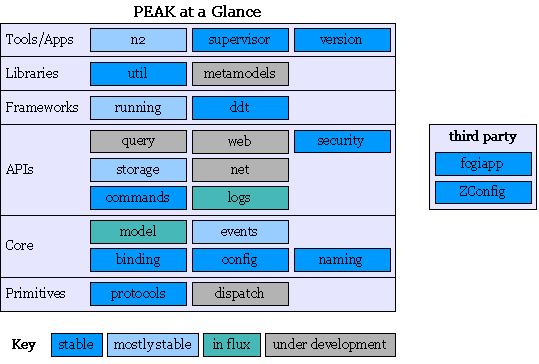 A quick note: the term "predicate dispatch" is used more often than "predicative" despite being less grammatically accurate. If you do a web or library search, try the shorter version.

Readers who read my earlier installment on the Gnosis Utilities module gnosis.magic.multimethods have had an introduction to the idea of multiple dispatch. In recap, most OOP programming is single dispatch; that is, just one designated object determines which code path is taken. In a call like foo.doIt(other,args,here)) the class of argument before the dot--say Foo--determines which code is run; the types of other, etc. might be tested in if blocks of Foo.doIt() but are not directly involved in code dispatch.

Conceptually, a more general technique is to allow all of the arguments to a function/method to determine its specialization in equal measure. Under a multiple dispatch system, a generic function like doIt() can be specialized to handle various type signatures, of various specificity. In the gnosis.magic.multimethods() API this might look like:

PEAK's module dispatch also has a type-based dispatcher, but it is somewhat trivial currently since it only handles single dispatch--the dispatch.on() wrapper gives you exceedingly little beyond normal Python class-based dispatch. Nonetheless, looking at PEAK's type-based dispatch warms us up to the syntax for full predicative dispatch. Note here that the examples all take advantage of Python 2.4's new decorator syntax which is used to modify defined functions or methods. You can use PEAK generic functions with earlier versions of Python, but the syntax accomodation is less elegant:

It is true enough that dispatch.on() generic function signatures for new types can be added without changing the prior code. For example, I could add a @doIt.when(float) or @doIt.when(MyClass) to the prior code, and later calls would utilize this if relevant. But there are a number of ways to accomplish largely the same thing without the PEAK dispatch package.

Types are a funny thing. What most programmers think about when they think about variable or object type owes a lot to the vagaries of computer CPUs--even among programmers of high level languages like Python. The difference between an int, float, and long are not compelling distinctions among the numbers themselves, but simply accidents of how chip designers have used registers and operands. But at a theoretical level the type of integers between 3 and 17 is just as sound as the type of integers between 2^31 and 2^31-1 (the latter being what the type int is in Python, on 32-bit machines at least). In fact, it makes sense to call IntBetween3And17 a -subtype of int, at least informally, whether or not the inheritance tree matches that.

We can, of course, create our own types in Python by means of the class statement, and arrange our types in whatever hierarchies we like. But then, we can also enforce the collection of values that a particular class may hold. The class IntBetween3And17 is not too difficult to implement in Python; nor is, for example, returning an instance of the more general IntBetween0And1000 in case you try to add 100 to an object of the more restrictive class.

What PEAK's dispatch module has done--though Eby and other contributors may or may not think of it this way--is create a rich parametric type system to enhance the relatively meager built-in types in raw Python. However, rather than provide wrappers for creating various restricted-membership values of other classes--builtin or user defined--[dispatch] provides a way for generic functions to do their own fine-tuned "duck typing." The phrase "duck typing" is often used in Python (and Ruby) circles in reference to the expression: "If it walks like a duck and quacks like a duck, let's treat it like a duck": We do not generally care what an object is. As long as it tastes as good as a duck, Python will happily swallow it when in a mood for duck.

Let us take a look at our simple doIt() example with a bit of parametric typing thrown in:

Notice that the predicates you can specify (as strings) in @doIt.when() conditions are exactly the same Python code you might use an if block had you written the logic procedurally. However, generic functions are much better; generic functions will order themselves from more to less specific, so there is no question of putting an elif in the wrong place. And perhaps most powerful of all, you can add more @doIt.when() conditions in any subsequent code, and doIt() will thereafter begin evaluating that new condition as a candidate to fulfill a particular call.

Unfortunately, once you start writing general predicates describing the values you would like to handle within a particular function body, it becomes easy to create amiguous conditions. Or at least that is exactly what I did quite innocently in trying to write the above example. For example, as a first brush, I naively wrote:

Each condition is perfectly reasonable in itself. But then, both are equally true for the call doIt(10,"flaz"). Rather than guess what you might have meant, PEAK raises the exception dispatch.interfaces.AmbiguousMethod.

Fair enough, we might say. After all, we really ought to specify unique conditions, or at least conditions that can be arranged by specificity. But I can very easily imagine a collection of defined predicative generic functions working happily for a long time before the ambiguous case is encountered. PEAK only complains when a particular call creates amibiguity, not when the potentially ambiguous functions are defined.

Moroever, even though the above example seems easy to catch, it can get worse. After all, we are just stating two overlapping conditions about foo. But ambiguity need not be restricted to conditions of one variable. They can be about multiple variables, and the ambiguity might only exist with particular combinations of values. For example:

Ambiguity in interaction of conditions

It starts to look, potentially, like difficult program logic to debug.

One way to ease the possible pain of predicate ambiguity is by breaking down applications of conditions into separate generic functions. PEAK dispatch gives you a similar ability to explicitly dispatch to a next_method as gnosis.magic.multimethods or CLOS has.

We will not go into the details of next_method here; instead, let us focus on the more general techniques of wrapping the primary generic functions in pre-conditions and/or post-conditions--methods that are called before or after a primary function. Moreover, unlike with primary conditions, doIt.before() and doIt.after() conditions are happy to execute multiple satisfied predicates. This matches our concept of a number of pre-conditions we want to make sure of before calling the main code. In case of ambiguity, order of execution is essentially arbitrary (it uses the order of definition).

A variation on our little doIt() example makes this more clear:

Dispatching on pre- and post-conditions

If you are able to state invariant pre- and post-conditions, you can greatly reduce the danger of ambiguity sneaking in.

There is one more thing to notice in this last example. In prior examples, we always used the same doIt() name to define specializations of the generic function doIt() However, there is no requirement for that naming pattern. Each specialization may be named however you like, and descriptive names are a good idea when applicable. The generic function itself must be named in the decorators to specialization and in the ultimate call that gets dispatched. Moreover, specialization functions are perfectly well usable outside of the generic framework. For example, if you like, you may call sayValues("blah","bloo") by itself; in this case, the effect is the same as calling doIt("blah","bloo") (but only because neither pre-condition nor primary conditions are satisfied by these arguments.

Generic functions--especially the wild idea of predicatively dispatched functions--can be a little hard to reason about at first. But predicative dispatch is a very elegant extension of multiple dispatch on (narrow) types alone.

The greatest benefit in PEAK's dispatch package is the possibility it offers for a much more accurate and concise modularization of code. Once you define a generic function and a collection of specializations, you remain free to add as many additional specializations as you want later on--all without so much as touching the original (hopefully well-tested) code. For large scale collaboration, or simply for applications that are adjusted for a family of related versions, this package looks extremely promising.

I have not written about it here, but Phillip J. Eby has put considerable work into optimizing this dispatch framework; so you need not worry about these powerful facilities significantly impacting the speed of your programs that use them. You just get cleaner code, for free.

For the latest installable snapshot of the PEAK system in CVS, simply download:

The home page for PEAK itself is the place to start for an introduction to the library as a whole.

The front page of the PEAK Wiki contains, among other things, a very nice diagram laying out the components of PEAK, along with their statuses:

Phillip J. Eby gave a nice summary presentation on generic functions at PYCON '05. The slides are available at:

A prior Charming Python developed and presented a library to enable multiple dispatch.

The module gnosis.magic.multimethods is perfectly usable by itself if you wish to download it from:

However, multimethods can also be obtained as part of the overall Gnosis Utilities package, see:

David Mertz programs generically and is dispatched multiply. David may be reached at [email protected]; his life pored over at http://gnosis.cx/publish/. Check out David's book Text Processing in Python (http://gnosis.cx/TPiP/).